Eastfield Academy is part of the David Ross Education Trust and is a good and rapidly improving school where everyone has the opportunity to succeed. 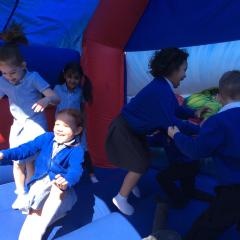 A large bouncy castle was put up within the school and pupils were given the chance to see how many bounces they were able to do within a minute. Prior to the event, Eastfield Academy pupils set challenges to see which class could collectively raise the most amount of money. Staff and members of the ‘Friends of Eastfield’ group were on hand to count how many bounces the pupils could do.

The total amount of bounces all together was 14,888 with there being a top bouncer in each class.  The class that collectively raised the most amount of money was Year 1 with an amazing total of £232 and the top bouncer was from Year 6 with 126 bounces in a minute.

The David Ross Education Trust supported the event as it promoted physical activity whilst also raising money for the Trust’s Inspiration Fund.  The school raised a total of £722 and improved their amount of bounces from last year by 4,000. The Inspiration Fund supports the Trust’s enrichment programme that aims to inspire and encourage young people to lead active lifestyles and develop their talents.